You can’t compare it to any other competitive event in the world! A race covering  1000 miles of the roughest, most beautiful terrain Mother Nature has to offer. She throws jagged mountain ranges, frozen river, dense forest, desolate tundra and miles of windswept coast at the mushers and their dog teams. Add to that temperatures far below zero, winds that can cause a complete loss of visibility, the hazards of overflow, long hours of darkness and treacherous climbs and side hills, and you have the Iditarod. A race extraordinaire, a race only possible in Alaska.

From Anchorage, in south central Alaska, to Nome on the western Bering Sea coast.

It has been called the “Last Great Race on Earth®” and it has won worldwide acclaim and interest.  American film crews as well as film crews from around the world have covered the event. Journalists from outdoor magazines, adventure magazines, newspapers and wire services flock to Anchorage and Nome to record the excitement. It’s not just a sled dog race, it’s a race in which unique men and woman compete. Mushers enter from all walks of life. Fishermen, lawyers, doctors, miners, artists, natives, Canadians, Swiss, French and others.  Men and women each with their own story, each with their own reasons for going the distance. Hundreds  of volunteers, men and women, students and village residents all help to organize and stage the event. They man headquarters at Wasilla, Anchorage, and Nome.  They fly volunteers, veterinarians, dog food and supplies. They act as checkers, coordinators, and family supporters of each musher. 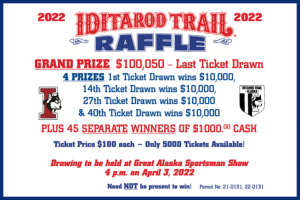